2016 IPWS Wedding Photographer of the Year & BEHIND THE IMAGE

Posted in Behind The Image, Wedding Awards, Weddings

First off, I’m delighted to share that this image of Stephanie from her wedding last March has won me the IPWS Wedding Photographer of the Year! Really thrilled with that!!

So let’s go Behind The Image of this shot! Firstly Stephanie & the girls got ready in Kilronan Castle, where I shot this on the morning of the 2015 eclipse! The girls were ready really early, almost an hour before the ceremony was due to begin so we had plenty of time to get the bridal portraits before I needed to go the church in nearby Keadue. After we had got the images I wanted to capture in the bridal suite, Stephanie asked me would I mind photographing a few pictures in this fab window downstairs.

I knew the image she had in mind as I’ve seen it done a few times, and honestly, it’s an image it try not to do very often as it’s not really my style…you know the shot, bride in the window, arms up holding onto sides or curtains. You might think it’s an easy shot to pose, but I’ve only seen it done properly a handful of times by Australian or American photographers.

So we down to the window & I had about 5 minutes to shoot, which is way more time than I usually have before going to a ceremony, and that’s the best part of having a bride ready really early before a wedding…no rushing or panicking & time to do photographs or spend with the girls! We captured the beautiful full length shot of Stephanie in the window, and then I just started to move around, as I really wanted to do my own take on that shot. As soon as the sun came out, it gave me the beautiful light I needed for the shot below. With the strong window light, the left side of the frame was always going to be black, so I just filled in the space shooting through some led lights…it was a little luck the light colours matched the colour scheme of the wedding! 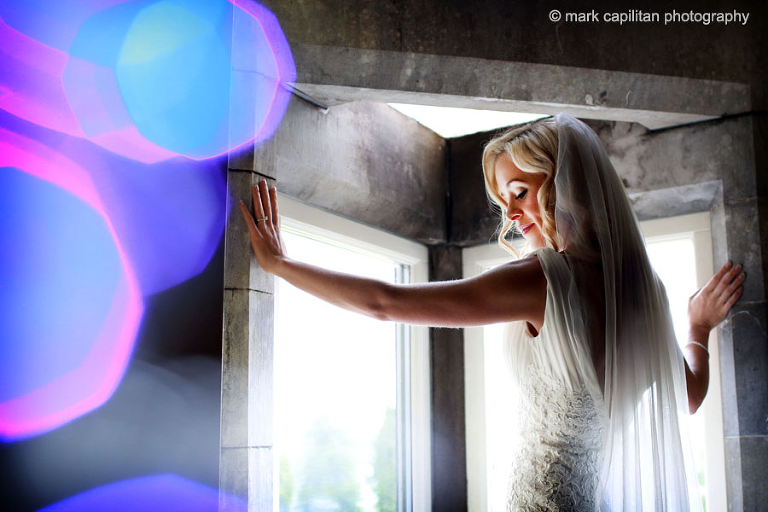